do you remember one thing we learned at school, that there are ranges of sound that we can not hear but some animals can? dogs hear low frequency sounds while bats hear the high.
do you believe that some gifted people can hear sounds in such ways?
one day we went to the wood then Aik stood still for a few seconds, "Mami, listen."
"listen to what?"
"sound of smoke."
how was I able to hear the sound of smoke? smoke is to be seen not to be heard. but he was listening to something, not looking at something.
.
do you remember one thing we learned at school, that two wave of sounds with the same frequency will resonant an provide larger amplitudo (or eliminate each other)?
I like to think about 'two things with the same frequency will resonant' is not only for sound. there many other frequencies: magnet, light, any other may be I don't know the name. it's like when two people are having the same 'frequency', they would click and easier to chat, communicate, even collaborate.
.
do you think animals and human can have the same kind of frequency?
I never thought this was special but now I do.
later these days during Ramadhan, Aik likes to take some walk in the morning. not far, only about 2-3 kilometers, changing routes but still around neighborhood. along the walk he likes to listen to (yes he seems to try to put his ears larger on) sounds of animals. dogs, cats, roosters.
some people may think dogs are aggressive. they are afraid to pass by a house that has barking dogs. but Aik loves to, then bark at the dogs while laughing happily.
he knows houses where dogs live in. few tens of meters before we get there Aik would 'bark' then the dogs bark back. then when we get there the dogs are already there. 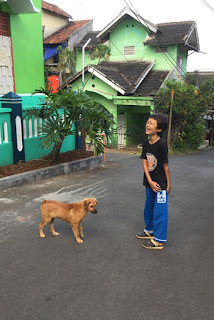 in some other days Aik just keeps walking, then some puppies follow him. 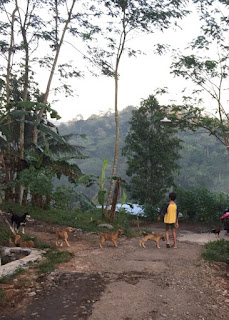 this morning some cats did. 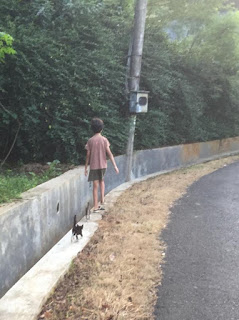 one day a cat followed him for quite distance. Aik told him to stop following and go home. "stop, kucing, jangan jalan. hush hush. pulang." and the cat stopped following him. 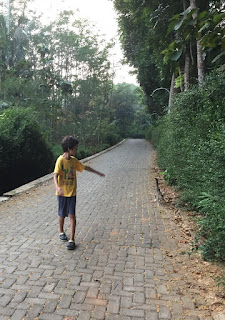 mostly in the walks, he would greet any animals he meets. sometimes just walk by, "hello dogs, get in. jangan di jalan.'' some other times he stops and take some times to rub. 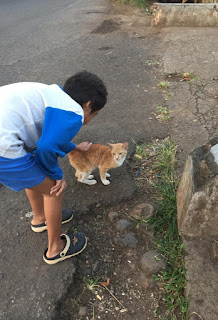 I'm not sure he is able to speak to animals like Doctor Dolittle or Solomon. it's just that vibe that invites animals to loving him. and I love that.

dandelions and the seeds 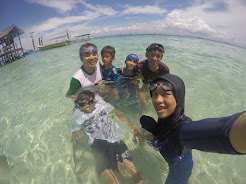 Latree
a mommy, as crazy as I can be